Hello everyone here is how to find the Renault Clio Radio Code for free with Calculator Generator , following a disconnection or a change of battery of your Renault Clio car especially after a breakdown, your car radio asks for a security code that you do not have access to. All Renault vehicles are equipped with a code protection system, do not worry, just follow these instructions, and you will be able to listen again to your favorite channels again while driving.

In this article, I will share with you how to get the radio code for all Renault Clio radio models

Do not try the classic code examples such as “0000” or “1234”, an effective program exists, helping you, through this guide, to find your code

Developed to be a unique identifier of your car radio, it is essential to recover it. Try to find it on a label stuck on your car radio or by manipulating it manually.

A letter followed by three numbers should appear, it is indeed your pre-code. Renault clio radio code 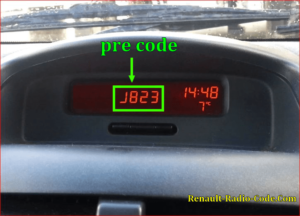 Car radio label recovery method: Take your car radio out of its original location with a car radio key kit.

You should find, by driving a nail into each hole, as shown in the first picture, a label on which is marked;

After acquiring your pre code, from this one, you will be able to generate your Renault car radio Code with the App below